Chadds Ford was home to N.C. Wyeth, his son Andrew Wyeth, and grandson Jamie Wyeth. The Brandywine Battlefield (site of the Battle of Brandywine) is located in the township, along with the Brandywine River Museum, which houses much of the Wyeth collection. Weldon Brinton Heyburn (1852–1912), a U.S. senator from Idaho, was born in Chadds Ford.

The original name of the township, Birmingham, was given to the territory by William Brinton in remembrance of the town of the same name in England.[5] 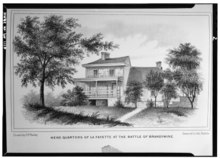 Frances Chadsey, or Chads, improperly spelled Chadd, emigrated from Wiltshire, England in 1689 and lived in Chichester Township until 1696 when his name first appeared in the Birmingham Township tax records.

On September 11, 1777, the house owned by George Gilpin was occupied by General Howe of the British Army during the Battle of Brandywine.[6]

The Chad House, Chadds Ford Historic District, Gilpin Homestead and William Painter Farm are all listed on the National Register of Historic Places.

Find a Home in Chadds Ford

The data relating to real estate for sale on this website appears in part through the BRIGHT Internet Data Exchange program, a voluntary cooperative exchange of property listing data between licensed real estate brokerage firms in which Coldwell Banker Realty participates, and is provided by BRIGHT through a licensing agreement. The information provided by this website is for the personal, non-commercial use of consumers and may not be used for any purpose other than to identify prospective properties consumers may be interested in purchasing. Real estate listings held by brokerage firms other than Coldwell Banker Realty are marked with the IDX icon and detailed information about each listing includes the name of the listing broker.
©2022 BRIGHT, All Rights Reserved. Information Deemed Reliable But Not Guaranteed. Some properties which appear for sale on this website may no longer be available because they are under contract, have Closed or are no longer being offered for sale.
Data last updated: May 25, 2022 11:07:pm.